Recently I discovered something that I, an avid and normally savvy label-reader, am surprised I never noticed before. Virtually very organic brand of coconut milk, soymilk, almond milk, etc. is “fortified” with  Vitamin D2 (by all accounts/research a poorly absorbed/utilized and unhealthy form; all authorities recommend we supplement with D3 and most of the supps we buy are indeed D3), and synthetic Vitamin A (retinyl palmitate). I would normally avoid both like the plague (and thought i was!).

For some reason, prescription vitamin D is given in the form of D2 (ergocalciferol). Sunshine exposure and fish consumption provide vitamin D in the form of D3 (cholecalciferol). The American Journal of Clinical Nutrition says that “Vitamin D2, or ergocalciferol, should not be regarded as a nutrient suitable for supplementation or fortification.” So why are all of our “organic” nutmilks and non-dairy milks “fortifying” with this vitamin?

I don’t want or need the fortification, period (I just want the freakin’ coconut); but if the companies feel that every single alternative milk product has to match US RDAs for A and D offered by cow’s milk (ridiculous, in my opinion; how many people drink “milk” for those nutrients anyway?), for goodness’ sake use the natural forms. (D3 is almost as cheap as D2; you can get a ginormous bottle of D3 5000 IU veggie softgels for five bucks.)

As for synthetic Vitamin A (retinyl palmitate), synthetic vitamins in general have been widely and repeatedly proven not to have the benefits of their natural counterparts and in some cases to actually cause harm. Vitamin A is no exception. (It should also be avoided topically in skincare, too, according to the Environmental Working Group and many others.)

I am dismayed at this discovery, and I’m not going to use them anymore. I was sort of agnostic about the guar gum, gellan gum, and xanthan gum in most of these milks, based on my research, but synthetic vitamins is going too far.

Please stop putting synthetic vitamin D and synthetic vitamin A in your milks. I was loving your unsweetened coconut milk by the case until I noticed this. D3 is not that much more expensive than D2 and studies show it is more effective and less toxic. I will not buy your product any more till you use natural vitamins or take them out altogether (I don’t drink it for the A and D anyway! I bet most people don’t either.) It’s marketing, not health-producing. I suggest you find out what people really want on this. I’d spend more to get coconut milk, soy milk and almond milk without synthetic useless vitamins.

The fact is, you don’t need to drink anything to get Vitamin D. If you find or believe you are deficient (and many natural/functional medicine doctors do consider that many people are; a simple blood test called 25(OH)D, also called 25-hydroxyvitamin D, can confirm if you want to be sure) and you want to supplement Vitamin D, go to iherb.com / vitacost.com / luckyvitamin.com or such, and look for Vitamin D3. It’s dirt cheap. You can get 1000 IU, 5000 IU or 10,000 IU depending how low you are and how much you want/need to supplement (again, get tested).

(The normal range of vitamin D is measured as nanograms per milliliter (ng/mL). Some experts recommend a level between 20 and 40 ng/mL, or 30 to 50 ng/mL. Natural healing experts who tend to look for “optimal” and not just “normal” most often recommend a level between 50 and 70 ng/mL, and between 70-100 if you’re in the throes of a major illness. (Over 100 ng/mL is definitely considered excessive.) 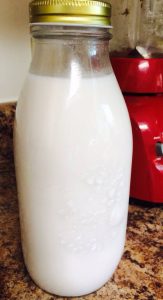 For now, I figured out how to get my beloved unsweetened vanilla coconut milk for my delicious smoothies without buying the prepared cartons that are always fortified with retinyl palmitate and D2. For those like me who don’t have the bandwidth to buy whole coconuts, cut or shred them up, grind down into butter, etc., the middle way seems to be to buy culinary coconut milk or coconut cream, unsweetened. Unlike the drinking milks, these aren’t fortified. (Many do contain guar gum, but at least not gellan gum and xanthan gum too.)

Simply pour a can/container—about 11-15 ounces—of the culinary coconut milk into a glass quart (or so) jar, fill the rest with fresh filtered water, and add a splash of vanilla if desired. (I desire.)

This works just as well in my smoothies as the Pacific Foods brand I was buying. No fortification I don’t need. And it’s actually cheaper this way. I’m paying about a buck fifty for 32 ounces instead of 3.50. Score!

Self-Care as a Sacred Practice

Welcome to a world full of chocolatey-rich healthy-living insight and encouragement, along with openhearted field notes from my own journey—all to help you nourish your well-being, nurture your joy, fuel your fitness, and age backwards while fearlessly living forward. Join the Joy Fuel community and be the first to receive resources, recipes, events and more. Plus, the most useful and juicy curated content from the health-news universe that passes my very sensitive bullsh--t meter. :)

This website uses cookies to improve your experience while you navigate through the website. Out of these cookies, the cookies that are categorized as necessary are stored on your browser as they are essential for the working of basic functionalities of the website. We also use third-party cookies that help us analyze and understand how you use this website. These cookies will be stored in your browser only with your consent. You also have the option to opt-out of these cookies. But opting out of some of these cookies may have an effect on your browsing experience.
Necessary Always Enabled
Necessary cookies are absolutely essential for the website to function properly. This category only includes cookies that ensures basic functionalities and security features of the website. These cookies do not store any personal information.
Non-necessary
Any cookies that may not be particularly necessary for the website to function and is used specifically to collect user personal data via analytics, ads, other embedded contents are termed as non-necessary cookies. It is mandatory to procure user consent prior to running these cookies on your website.
SAVE & ACCEPT