Yes, I have a tendency to wonder if adding chocolate to things will make them even better.

I mean, give me some credit. I don’t do it to everything. I don’t add it to, say, cornbread or apple pie or tomato soup. (Now, black bean soup would be another story. Mole, right?)

But I’ve long wondered if my turmeric milk (also known as “golden milk”)—based on a traditional Ayurvedic recipe—could be made a little more appealing with the addition of cocoa. I mean, I drink hot cocoa in nut milk. I drink turmeric in nut milk. Why not cut to the chase and do both at the same time?

Turmeric is used medicinally, but it’s also a popular culinary spice, not only as one of curry’s key ingredients, but on its own; it’s not all that strange for today’s superfoodies to recommend tossing some into a smoothie or hot cereal bowl.

Unless you’ve been dwelling in a cave for the last 20 years, you’ve probably heard about the health benefits of turmeric. It’s one of the most studied herbs on the planet (there are over 6,000 scientific studies on turmeric)—and for thousands of years before that, it’s been one of the most revered.

And for good reason. A mild-mannered pantry item by day, this bright yellow aromatic spice also belongs in the natural medicine chest for its healing and preventive powers. Natural and conventional health practitioners even seem to agree about its efficacy fairly often. The evidence just keeps piling up. (I’ve added a sampling of diverse resources on turmeric at the end of this post, but you can have a look around for yourself.) 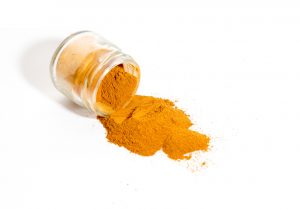 that; however, it’s excellent for digestion and the immune system, for skin and liver (those two are considered connected in Eastern medicine approaches like Ayurveda and Traditional Chinese Medicine), and to lower cholesterol. It’s believed beneficial for diabetes, depression, and arthritis. It’s used as an anti-coagulant and is being studied in relationship to cancer prevention and even treatment.

The most-studied compound in turmeric is curcumin, and many turmeric supplements provide standardized extracts of curcumin. But some practitioners believe the whole herb is superior (as the root’s many compounds work in concert, and there may be other components not yet studied that are as valuable).

I like to chow me some turmeric for a number of reasons. I’m impressed enough by the data to agree with many esteemed health professional and advocates that it’s one of those spices we should all be consuming every day. Additionally, with the ongoing healing of a shoulder injury, I’m trying to get down as much of it as I can, because it’s not only anti-inflammatory but a terrific tissue healer.

Turmeric has effective properties, but it’s also extremely mild, like many foods with medicinal qualities. Many  While some herbs work well in capsules, it’s hard to consume enough turmeric. That’s why there are recipes like turmeric paste (which is featured in my book Herbal Defense)—and why it helps to sneak it into drinks like smoothies as well as the traditional golden milk.

One of the classic recipes for golden milk is demonstrated by my friend, herbalist and co-author on Herbal Defense, Karta Purkh Singh Khalsa, in this video.  I tend to be very quick, utilitarian and spartan about it: a teaspoon or two of turmeric in a little saucepan of almond or coconut milk, a dash of honey or date sugar, and I’m sipping away.

One cold morning last week (yes, yes, Tucson gets cold—believe it—it had been 30˚ overnight on this particular morn and I woke jonesing for a soothing hot drink), I decided to take the plunge.

I was fully prepared for this experiment to be an epic fail. I mean, turmeric and chocolate? I thought there was a chance it might be okay (because, hey, spicy hot cocoa), but also a good chance it would be plain gross.

I messed around per the below recipe, and got the “chocolate golden milk” you see in the photo. 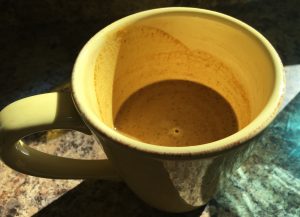 And it really wasn’t half bad. Not even a quarter bad. I enjoyed an oddly zingy cup of cocoa (the Dagoba Xocatal with its cinnamon and chiles sort of made the whole spice thing just seem normal) and I got a bit of turmeric in for the day. (The teaspoon-plus is not enough to be really medicinal—I also take capsules. That’s another story for another day—Herbal Defense discusses turmeric and herb dosages in more detail. On the other hand, every bit counts.)

So I promised to put it on the blog, and here it is.

Look, I totally get if this seems too bizarre, but there are weirder superfood drinks out there. Let me know what you think!

Self-Care as a Sacred Practice

Welcome to a world full of chocolatey-rich healthy-living insight and encouragement, along with openhearted field notes from my own journey—all to help you nourish your well-being, nurture your joy, fuel your fitness, and age backwards while fearlessly living forward. Join the Joy Fuel community and be the first to receive resources, recipes, events and more. Plus, the most useful and juicy curated content from the health-news universe that passes my very sensitive bullsh--t meter. :)

This website uses cookies to improve your experience while you navigate through the website. Out of these cookies, the cookies that are categorized as necessary are stored on your browser as they are essential for the working of basic functionalities of the website. We also use third-party cookies that help us analyze and understand how you use this website. These cookies will be stored in your browser only with your consent. You also have the option to opt-out of these cookies. But opting out of some of these cookies may have an effect on your browsing experience.
Necessary Always Enabled
Necessary cookies are absolutely essential for the website to function properly. This category only includes cookies that ensures basic functionalities and security features of the website. These cookies do not store any personal information.
Non-necessary
Any cookies that may not be particularly necessary for the website to function and is used specifically to collect user personal data via analytics, ads, other embedded contents are termed as non-necessary cookies. It is mandatory to procure user consent prior to running these cookies on your website.
SAVE & ACCEPT